Achieving aquarium based breeding is vital to the work we are doing. By offering live exhibits we aim to inspire our visitors to care about the ocean and raise awareness of the diversity of species living within them and the threats they face.

The Deep has been successful in breeding and culturing a number of species housed within the aquarium, contributing to crucial European Breeding Programmes. Through unlocking the key to successful breeding and using sustainable measures, we can share our knowledge and expand on these techniques and reduce any impact on wild populations. By observing courtship rituals and behaviours within the aquarium, we can learn a lot about each species, at times, much more than is possible in the ocean. This knowledge is pivotal in informing conservation strategies for protecting wild populations. 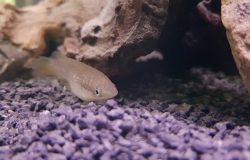 The Powder-blue panchax is a species of killifish endemic to Madagascar and are classified as ‘Endangered’ by the IUCN Redlist. Their range is restricted to the island of Nosy Be, the basin of the Sambirano river, several streams on the Ankify peninsula and immediately south of the Sambirano river.

The Deep is working with the Zoological Society of London on their Fish Net project, an initiative to tackle the plight of many freshwater fish species. The ex-situ breeding in aquariums is part of a multi-faceted programme to help safeguard habitat and populations for the future. It also aims to raise awareness about the importance of Madagascar’s truly unique flora and fauna and the significant threats it is facing from habitat destruction and pollution.

In our little group of 20 individuals, several gravid females and males were placed into breeding enclosures where very quickly courtship and mating took place. After a couple of days, the male and females were placed back into the group and the eggs (under the watchful eyes  of the aquarists) were left to develop. It was only a matter of weeks when hiding amongst the plants we discovered tiny fish fry!

Despite only being millimetres in size, they are fully independent but require incredibly small food. The mini breeding enclosure will be a nursery for them where we can monitor their feeding and growth before they are big enough to join the breeding programme. 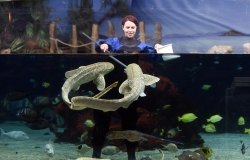 In 2015 The Deep became the first aquarium in the UK to successfully breed and rear Zebra sharks. Of the six pups born, the four males have been transferred to Lisbon Oceanarium in Portugal and the Jerusalem Biblical Zoo in Israel. The two remaining females stayed here at The Deep.

To monitor the development of the embryos within the eggs, they are carefully incubated behind the scenes. Temperature and salinity is closely monitored for the 6 month period until hatching. The young pups are then fed on a diet or prawns, mussels and other shellfish, with regular body weights taken to ensure they are growing healthy and strong.

The Deep also successfully hatched three Zebra shark eggs, provided by Shedd Aquarium in Chicago, USA. All hatching as males, the decision was made to keep one male within the aquarium and transfer the other two, one to Blue Planet in Cheshire and the other to National Marine Aquarium in Plymouth. The successful hatching and rearing of these sharks, has offered the opportunity to inject brand new bloodlines into the European Breeding Programme for Zebra Sharks, increasing the genetic diversity of this species within European aquariums.

In 2016, The Deep welcomed the arrival of their first penguin chicks. Having only housed penguins since 2014, the formation of successful breeding pairs was an unexpected, but very welcome, surprise. Each year, nesting and courtship begins in early spring and eggs are usually laid between late April and Mid May.

The penguins’ habitat was constructed to meet all their environmental and behavioural requirements, including lots of large loose stones for nest building. When a potential mating partner has been selected, the male will present stones to his chosen female and begin constructing a nest for her on which to lay her eggs. The eggs are incubated for 34-37 days, with each parent sharing the responsibility, switching every 1-3 days. When hatching begins, the chick will begin to ‘pip’ at the egg shell with a special tooth on its beak. It can take up to 12-24 hours for them to fully emerge from the shell.

Both penguin chicks, Attenborough and Lizzie, were closely monitored after hatching but were fully parent reared with no intervention by staff needed.  Once old enough, they ventured from the nest and began feeding from our keepers hands with the rest of the colony. 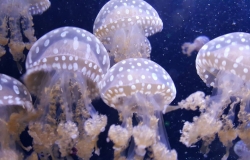 Over the years, The Deep has achieved great success in culturing and displaying a variety of jellyfish species, including a number of UK firsts. To date, The Deep has successfully cultured 10 different species of jellyfish, often providing them to other BIAZA aquariums to enhance their exhibits.

Amongst these species, The Deep is the first UK aquarium to successfully culture the Black Sea Nettle, White Spotted Jellyfish, the Fried Egg Jellyfish and the Mediterranean Jellyfish.

The Deeps’ jellyfish culturing systems are set up behind the scenes and are suitable for rearing all life stages for both tropical and cold water species.

Jellyfish have a complex life cycles and each stage requires special care. These incredibly delicate animals are very sensitive to environmental changes and require specific food at the different stages of their life. They start out as a very small disc called an ephyrae which is released from a tiny anemone-like structure known as a polyp. All of our jellyfish are reared in special tank called Kreisels, which provide the correct water movement for both swimming and feeding.

As well as culturing the jellyfish we also have to culture their food. Jellyfish feed on microscopic animals called zooplankton. This plankton is hatched and harvested on a daily basis to provide the jellyfish with the highest quality diet. 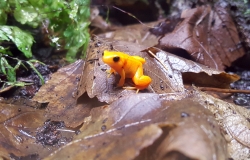 Classified as critically endangered by the IUCN, they can only be found of the Island of Madagascar. The number of these miniature frogs are dwindling rapidly in the wild due to habitat destruction and through infection from the deadly chytrid fungus – which is posing a great threat to frog species across the globe.

The Deep has successfully bred Golden Mantella on a number of occasions, under recommendation from the studbook keeper. Mantella lay their spawn in shallow, damp crevices or pools within their environment. Mantella eggs have a pearl-white ova inside the jelly-like protective casing. Several days after spawning tadpoles will start developing within the egg.

All spawn is removed from the frogs’ habitat for incubation and rearing behind the scenes so that our Aquarists can keep a close eye on their development. Once a tadpole has formed, regular water changes and feeds are undertaken to ensure the frogs are reared to adulthood in full health. 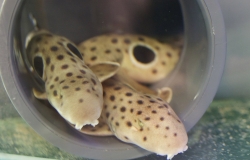 The Deep manages the species Monitoring Programme for the Epaulette shark. Epaulette sharks reproduce by laying eggs, which they then attach to rocks and seaweed for incubation. At The Deep, these are removed to be incubated behind the scenes where development can be closely monitored.

After around 130 days, a small 15cm shark pup emerges. Once the remaining yolk sac has been absorbed, they are fed on a diet of chopped shellfish including mussel, prawn, squid and peeler crab.

The Deep has successfully housed and bred these sharks for a number of years and has been able to assist other aquariums seeking this species for display through aquarium bred populations. 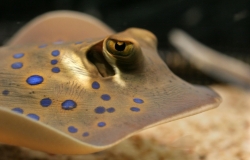 In 2005 The Deep welcomed the arrival of two Blue-spotted ribbontail ray pups, becoming the first aquarium in the world to successfully breed this species.This small ray is so named for the bright blue spotted pattern across the top of its body, making it very distinctive from other ray species.

Since the initial breeding success, The Deep has achieved subsequent births amongst their population, including the first documented occurrence of twins, and has been able to advise other aquariums across Europe on the methods and requirements specific to this species. The development of a European Association of Zoos and Aquariums (EAZA) Breeding Programme for this ray has allowed for the sharing of information and the accurate documentation of family lines to identify the best genetically matched pairs for breeding.

The Blue spotted Ribbontail Ray reproduces by giving birth to live young, rather than by laying eggs – as many other rays do. Because of their size, single pups are very often the norm. Twins are a very rare occurrence. Internal development also makes it very difficult to monitor the exact length of gestation. After delivering a number of pups, the mothers’ skin begins to look as though it is wounded, however these are in fact stretch marks and are quite normal in mature female rays.