The Deep has been working in the USA to help save injured sea turtles at New England Aquarium in Boston, Massachusetts. Here they rescue and rehabilitate hundreds of injured and sick sea turtles that get stranded on the shores near the aquarium every year.

The Centre makes an invaluable contribution to the health of the turtles and the wider eco-system by taking the stranded turtles from the beach back to their Rescue Centre at the Aquarium, giving them health checks and treating their injuries, before releasing them back into the sea so they can continue on their journey.

The winter season is a difficult time for sea turtles, as they make their way south to warmer tropical waters when the waters around Cape Cod Bay become too cold.  Each year, many turtles do not make the journey in time. Trapped by the hook shape of the bay, they can become disorientated. When the water reaches about 10° by mid-November, the turtles are too cold to eat, drink or swim and become “cold-stunned”, stranding themselves on the beach. Often they are suffering from life-threatening hypothermia, emaciation, dehydration or external injuries.

Deep Aquarist, Shoshana has spent time working within the facility helping them rehabilitate turtles, administering immediate and vital care to get them back onto the road of recovery.  She says “As soon as the turtles arrive at the centre, it’s all hands on deck to get them into a stable condition as quickly as possible. Their body temperature is taken and heart rate checked, because of their solid shell this has to be taken through the shoulder. It’s important to warm the turtles slowly as increasing their temperature too quickly could be harmful. When they come in they are placed in pools as 12.5°, this is then increased by 5 degrees each day until they are well enough to go into the highest pool, which is maintained at 22°C. The coldest turtle I held was a Kemp’s Ridley whose internal temperature was 7.4°C. It was so cold in my hands, I couldn’t believe it was still alive!”

One memorable admission to the Rescue Centre was turtle number 266, ironically dubbed ‘Munchkin’ by rescue staff because of her huge size! At that time, she was the largest loggerhead to ever come through the centre, weighing 137kg on arrival (increasing to 151kg as she was cared for by staff). Munchkin was found off Great Island, Massachusetts with significant wounds to her right flipper and left hind flipper thought to have been a result of entanglement in nets. She was nearly unconscious, sick and hypothermic. After months of intensive care she was released back into the ocean, a moment that was treasured by Shoshana. She told us “It’s these moments that overwhelm us with emotion and show us the types of things we can accomplish by working together.”

Before her release, Munchkin was fitted with a satellite tag so the care team can watch her progress and see where she goes. Loggerheads migrate for thousands of miles, but gaining data on a turtle at this stage of life is extremely rare. You can read more about Munchkin’s journey here

The ocean and sea turtles like Munchkin are facing accelerating threats like rapidly rising water temperatures from climate change, islands of floating plastic and ocean industrialisation. It is hoped by telling Munchkin’s story, we will help to inspire everyone to take action. 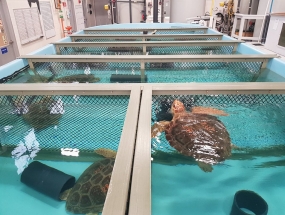 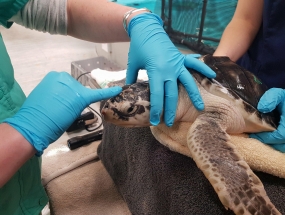 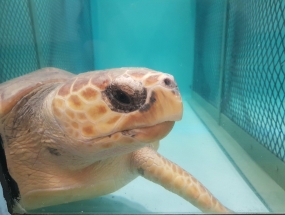 Following The Deep's donation of £25,000 to the Penguin Specialist Group, the team have made fantastic headway in developing the Global Penguin Conservation Strategy,...

Here at The Deep, we are committed to the Sawfish Conservation Society's aptly named See-A-Saw campaign, which works to help safeguard the future of these endangered and...

The Deep has been working in partnership with SECORE (SExual COral REproduction) since 2006, participating in fieldwork projects all over the globe including Puerto Rico,...