Every year The Deep welcomes a small number of students behind the scenes, allowing them to undertake a research project for their final year thesis. Topics include marine habitats, animal husbandry and nutrition, coral propagation, animal behaviour and breeding.

Research opportunities from degree level and MSc allow the students to gain valuable, practical research experience which provides a good foundation for future study or employment in marine conservation. They assist The Deep in their commitment to advance aquarium animal industry, veterinary science, welfare and scientific discovery.

Many of our students come from Hull University, but any student is welcome to apply for a degree level research project. Please see the ‘Guidelines for Students and Supervisors’ for further information.

You may see some of the students around the aquarium with a dashing blue clipboard, tablet or armed with a Go-Pro camera carrying out their studies. If you spot them, feel free to ask them about their project, they’ll be happy to tell you what they are doing! 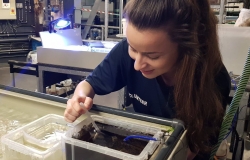 As part of her final year studying for a BSc (hons) in Marine Biology at Hull University, Sophie is undertaking her research thesis on jellyfish. She will be focused on determining whether water temperature acts as the environmental cue for strobilation (the stimulation of production and metamorphosis of ephyrae (juvenile jellyfish).

The growth and spread of these polyp colonies will be monitored (count data) and observed to determine how different conditions affects strobilation. 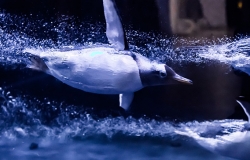 Studying for a BSc (hons) in Marine Biology at Hull University, Shannon will be recording and examining video footage from within the penguins habitat, as well as recording synchronised sound levels to monitor and discover if ambient sounds influence individual penguin behaviours as well that of the entire colony.

Living in a colony of very vocal penguins, like the Gentoo, means being exposed to lots of continual noise. Studies into how sound levels and communication is recieved within such environments can provide clues to the evolution of various behaviours.

Higher visitor numbers has been found to increase the number of penguin/visitor interactions at the enclosure window, for the bolder individuals. The study will examine in the ambient noise created by varying levels of visitors and identify if they play a part in the behaviour of the colony.

To complete his BSc (hons) in Marine Biology, Klay is undertaking regular observation and recordings of the Intra and Interspecific interactions of the fish species living within the Lagoon of Light display around static algae feed stations. These observations are primarily undertaken before the aquarium opens.

The monitoring of current animal interactions that take place around the algae feeding stations will be used to optimise the number and distribution of the algae bags for the herbivorous species within the display.

Analysis of these valuable feeding tools will identify means for evolving the process of their application within the habitat and any potentially required adjustments to allow for changes in fish numbers or population dynamics. 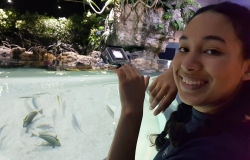 As part of her final year studying for a BSc (hons) in Zoology at Hull University, Choon spent her time researching the Blue Spotted Ribbontail Rays and the Blue Spot Rays within our Lagoon of Light exhibit. By using a Go Pro camera, she was able to accurately capture species activity during feeds for closer analysis.

Similar interactions between the rays and the juvenile Zebra sharks was also explored.