2.5 million litres of water and 87 tonnes of salt make this display home to some of the most incredible animals in the sea. Representing the vast open oceans, this exhibit provides a fish-eye view into the incredible underwater world of the deep oceans. See a variety of sharks and rays, including White tip reef sharks, Nurse shark, Grey reef sharks, Zebra sharks, Honeycomb whiptail rays and Green sawfish - the only pair in the UK. It is also home to a pair of rescued Loggerhead sea turtles.

This loveable duo, named Sensa and Mabouche were rescued from the wild after being caught on fisherman’s long lines in the Mediterranean, which damaged their lower jaws. Even after rehabilitation, it was decided they couldn’t go back into the wild as they wouldn’t be able to catch their own food, so now have a forever home here at The Deep.

Pressure increases the deeper you dive, with the biggest change being at only 10 metres down where pressure is double that at the surface. It is equivalent to two kilograms pressing on every square centimetre of your body. We are affected by pressure because we have air-filled spaces in our lungs and sinuses. In comparison, many sea creatures are made mostly of fluid which helps them withstand the effects of pressure.

Fish tend to swim in schools when out in open water as a means of protection from sharks and other predators. This reduces the individual’s chances of being picked off and eaten. Following in another fish’s wake can also save them energy.

Back to The Deep Tour 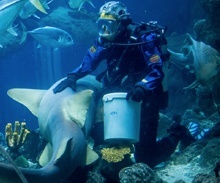 During the week (Monday to Friday), our daily dive show takes place here at 2pm. See our divers enter the water and hand feed all the animals (Monday, Wednesday and Friday only) as well as hearing a presentation from our guides about the species that reside here. On Tuesday and Thursday, our divers carry out a maintenance dive.

Here you can see some of the stars of Endless Ocean, so make sure to look out for them on your way round.

Our duo of turtles are called Sensa and Mabouche. Sensa is approximately 35 years old, weighs around 100kg and is 1 metre in length. Mabouche is between 15 and 20 years old and weighs around 40kg.

The sawfish uses its tooth-lined snout to slash through a shoal of fish then it eats the ones that are injured or dead. The green sawfish is endangered due to over-fishing.

The White Tip Reef shark has a patch on the tips of its tail and back fin. It mainly rests in caves or on sand during the day. At night, it swims in search of spiny lobsters, crabs, fishes and octopuses to eat.

This shark likes to rest at the bottom during the day. It searches for food by pushing its blunt head into crevices, locating potential prey with the two barbels on its chin. Timothy joined us in 2014 and weighs a whopping 15 stone and is over 2.5 metres long.

Also known as the Leopard ray, this member of the stingray lives in the Indo-Pacific. The design on its back is as individual as our finger print is to us and its tail is twice the length of its body.

Also known as 'Eddie', groupers usually feed on large fishes and large adults can weigh over 100 kgs. They have little to fear because of their size, which makes them inquisitive and bold. They can grow to the size of a small car (like a mini).

Young sharks are striped like zebras. Adults have blotches like leopards, which is why this shark is also called the leopard shark. The Zebra shark can squeeze into crevices to catch shellfish and small fish. They tend to live by themselves near the bottom.